Quite an unusual title for a blog post don’t you think? 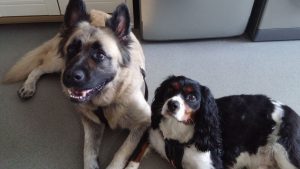 But I am not winding you up.

I am going to explain how my two dogs, Bella, and Oscar, can help your online business.

First, let me explain who Bella and Oscar are.

Bella is 9 years old, and one of the most unique and beautiful dogs you could ever see…and I am not just saying that because she’s mine.

She is a German Shephard/Mastiff cross which has led to her having the quintessential German Shephard face, but her coat is more akin to a Golden Retriever. Anyone who sees her remarks on how unique she looks and given that Bella is Italian for beautiful I think she is well-named.

It wasn’t actually me who named Bella, but instead it was my late step-daughter Caroline who raised Bella from a puppy. Caroline had two dogs and was struggling to cope with them both, so she asked if my wife Christine (Caroline’s mum) and I, would adopt Bella.

We said yes, as thankfully I work from home which means I can look after Bella properly, especially as she needs plenty of exercise.

Tragedy and A New Addition

Just a few weeks after Bella moved in with us, Caroline passed away suddenly at the mere age of just 37. You can imagine the grief at the time at such an unexpected loss, especially for Christine who lost her daughter.

As the time passed, Bella had an even more special place in our hearts, with Christine often commenting that Bella is a little bit of Caroline that lives on with us, and long may that continue.

As for Oscar, who is 4 years old, well he is adopted too. The story is that one of Christine’s work colleagues had bought him as a puppy as a companion for their elderly mother. Unfortunately, she was too frail to look after him properly, and so knowing we had Bella, they asked if we’d be happy taking on a second dog. Of course, we said yes.

Oscar is a King Charles Spaniel and Springer Spaniel cross and while Bella might be unique and beautiful, Oscar has to be the cutest and cuddliest thing on four legs, especially when you see his long floppy ears.

In case you are wondering, the marketing lesson isn’t to use the fact that we said yes straight away as a green light to use puppies in all your sales videos…unless you are selling toilet tissue!

Now you know Bella and Oscar’s history, let’s move on to how they can teach us something about online marketing.

I live in Woolwich, which is in South East London, and I’m lucky enough to live next to Woolwich Common. This is a large area of grassland, shrubs, and trees and is actually owned by the military, who have infantry barracks nearby.

Woolwich Common is perfect for walking dogs so that is where I, Bella, and Oscar head to 3 times a day for walks and for the other ‘functions’ that dogs need to carry out each day.

If you’ve ever owned a dog, you’ll know it is a surefire way to talk to total strangers when you pass them while they walk their own dogs. Comparing dog tales, letting the dogs sniff each other, and commenting on the weather are all part of the ‘dog walkers ritual’.

Doing It All The Wrong Way

A few days ago, I saw a man walking towards us, and he was shouting for his dog to come to him as we approached. “Max! Max! Max! Come here!”. Whatever Max was doing in the long grass it was obviously fun, as he was paying no attention to his owner, whose name I later found out was Neil.

As we drew close to Neil he turned and exclaimed ” That dog has a mind of his own” albeit I have deleted the expletives. “They all do from time to time” I replied.

Next thing, Max appears and runs toward Neil, whose face by this time was turning red. At first, I thought Neil was going to hit Max, but thankfully he didn’t, although what he did do wasn’t much better.

He shouted at Max, “You bad, bad dog! You come when I call you!” Poor Max cowered as you’d expect, and then Neil turned to me and said, “Sorry about that” to which I replied, “What are you apologizing to me for? It’s Max you should say sorry to”

Neil looked at me quizzically, so I decided to explain. “Tell me, is that what you normally do when Max doesn’t come to you straight away?” Neil replied, “Well, yes. he’s bad for not coming to me straightaway”. His answer told me all I needed to know. While Max might need some training, it was actually Neil who needed a lesson.

What was happening in Max’s mind was that when he was going to Neil, he was getting shouted and bellowed at. The result is Max thinks ‘I do not really want to go to him when he calls me, so I’ll delay for as long as possible because when I do go to him, he shouts at me, and I do not like it.’

Having explained that to Neil I could see the penny drop. “So, you are saying even if he doesn’t come at once when he does come to me, I should praise him?”, he asked. “Yes”, I said.

Neil thanked me and made a comment about how I should become a dog trainer, but the principle that I was explaining to him is one which anyone who knows anything about dog behavior can tell you.

Dogs will keep doing something you want them to if the outcome is pleasurable. It can be a treat, a ‘good boy or girl’, or a tickle under the chin, it doesn’t matter. As long as they associate the next thing that happens to them as being good, they will repeat the behavior.

It has worked as the basis for humans and dogs to live in harmony for centuries and is a tried and trusted core element of dog training. It works, and because it works time and time again it beggars belief why anyone who wants to train their dog properly would deviate from it.

That same logic applies to many walks of life where there is a set of core principles and actions which have worked for thousands and often, millions, of people and helped them find success in their field. If followed by others, they are almost certain to achieve the same success.

Unfortunately, there will be those who are either unaware of the core principles, or worse, they are aware of them and simply ignore them. Then, when the day of reckoning comes and they need to perform, take action, or make a decision they are ill-equipped and unable to do so.

Think of our dog walker friend, who was unaware of the core principles of dog behavior. Or, the basketball player who didn’t make the college team because he chose not to follow the coach’s core training structure. Maybe, you’ve heard of a trainee lawyer who failed to pass the bar exam because they could not be bothered to learn basic legal principles.

This also applies to starting and running an online business where there are a few basic principles and actions that are needed to be successful, but bizarrely they are ignored by many.

This seems even crazier when they are being advised to follow these basic steps by successful entrepreneurs, marketers, and coaches, who have proven time and time again that they work.

Take building a list, for example. If I had a dollar for every time I had seen, read, or heard that building a list is essential for building a successful online business then I’d be a lot closer to Jeff Bezos in terms of my wealth, than I am now.

Look around the countless Facebook groups, forums, and masterminds, where you will see individuals who have built a successful online business, tell you that success began to happen for them when they started building a list. And yet there are those who choose not to, who wonder why they haven’t found success.

Building a blog is another foundation of online businesses that almost all of those who have found success have followed. It provides them with a hub from which they can build their business and more importantly their list of followers and subscribers. And yet there are those who choose not to, who wonder why they haven’t found success.

Take a look at those who are successful online, and the vast majority will also have created their own product. One benefit is the revenue that selling your own product will generate, but there are more positives than just that.

Selling your own product increases your profile, it is a great networking opportunity as you communicate with other marketers who might promote your product, and it is one of the best ways to build your list as you add buyers to it. And yet there are those who choose not to, who wonder why they haven’t found success.

The Lesson From Bella and Oscar

When I was training my dogs, I followed tried and tested principles that have worked previously for millions of other dog owners, and it worked for me.

Thanks to Bella and Oscar this teaches me that if I want to build a successful business online, I should follow the proven system that has led to others before me being successful

So, I am going to take the same steps that have enabled others to build a successful business…

It’s the same proven system you should follow too if you want to be successful online.

PS: For more details on the steps to take by someone who has done it many times over with great success, Watch this Free Training: https://jamesutterson.com/provensystem